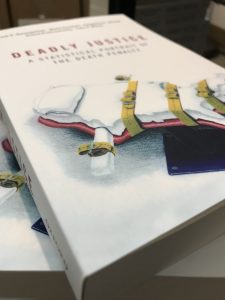 On June 28, 2018, the US Supreme Court denied requests by two death row inmates from Mississippi to have their cases heard. Justice Stephen Breyer dissented from these decisions, citing a recent work by Prof. Frank Baumgartner along with UNC undergraduate students Marty Davidson, Kaneesha Johnson, Arvind Krishnamurthy, and Colin Wilson on three different points. First, one of the inmates has been on death row for 42 years, and Breyer notes the research they conducted on exactly this topic. Second, he refers to their analysis of studies of whether the states have narrowly targeted the death penalty only for those crimes and criminals who are truly the “worst of the worst,” noting their finding that indeed in many states the vast majority of homicides remain eligible for the death penalty. And finally, he cites their research on the declining use of capital punishment and increasing geographical concentration of it. All of these facts, the Justice argues, merit concern.

Deadly Justice: A Statistical Portrait of the Death Penalty was published in 2018 and provides a wealth of empirical data relating to trends in the US death penalty since its modern beginnings in 1976. Besides being the main text in POLI 203, the book was designed to answer many of the questions that Justice Breyer posed in his 2015 dissent in the case of Glossip v. Gross. Apparently, the book is reaching two of its most important intended audiences. Beyond the students in POLI 203, clerks and justices of the US Supreme Court are paying attention to it as well.