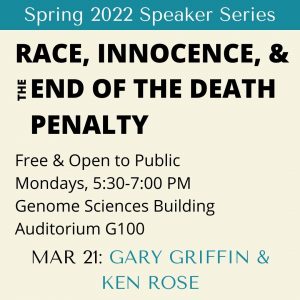 Mr. Griffin served five years on Mississippi’s death row before his death sentence was overturned. He was released from prison after 23 years in 2009 and later worked as an investigator in capital trials and post-conviction death penalty appeals in Jackson, Mississippi. Mr. Rose, formerly the Executive Director of the Durham-based Center for Death Penalty Litigation, has been a capital litigator for 40 years, and was Mr. Griffin’s appellate lawyer and supporter.

**For a listing of upcoming speakers please visit Poli203 at this link:  http://fbaum.unc.edu/teaching/POLI203_Sp22/poli203-sp22-speakers.html