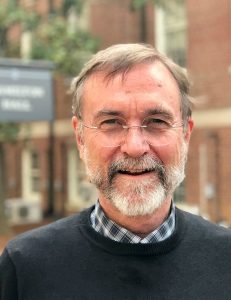 Michael B. MacKuen, Burton Craige Professor of Political Science, received his B.A. from Virginia (1970) and his Ph.D. from Michigan (1979). Prior to coming to UNC, he taught at Washington University and the University of Missouri in St. Louis. His research has focused on the way that citizens gather and digest information about politics and the economy as well as on the ways that the broader macro-polity connects citizens, politicians, and public policy in a systemic way. This work has been published in scientific journals including the American Political Science Review, the American Journal of Political Science, and The Journal of Politics. Recent articles include “Dynamic Representation,” “Anxiety, Enthusiasm and the Vote: The Emotional Underpinnings of Learning and Involvement During Presidential Campaigns,” and “Peasants or Bankers? The American Electorate and the U.S. Economy,” all in the American Political Science Review. His books includeAffective Intelligence and Political Judgment (with George Marcus and W. Russell Neuman, 2000) and The Macro Polity(with Robert Erikson and James Stimson, 2002).