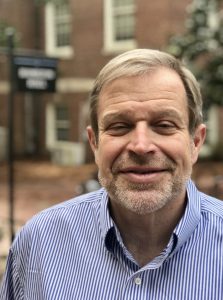 Robert M. Jenkins is a Teaching Professor in the Department of Political Science at the University of North Carolina at Chapel Hill.

His scholarly interests are in the areas of security policy, international organizations, social and political change, ethnic conflict, nationalism, and state building. A long-time specialist in Central and Eastern Europe, his expertise also includes the successor states to the Soviet Union, South Africa, and the European Union.  His current research includes projects on the social bases of populism in post-communist Europe and international intervention into the post-conflict Western Balkans.

Dr. Jenkins has been actively involved in study abroad activities since 2001.  In spring semester 2022, he directed a UNC study abroad program on Transatlantic security in Brussels and London.  He regularly leads a summer program to Bosnia, Kosovo, and Vienna, Austria. In 2013 and 2016, he was faculty director of the UNC Honors semester in Cape Town, South Africa.

In addition to study abroad, he regularly teaches a mix of introductory and advanced undergraduate courses (Crisis and Change in Russia and Eastern Europe; International Organizations and Global Change; Ethnic Conflict and International Intervention in the former Yugoslavia; Transatlantic Security; Race, Ethnicity, and Political Change), as well as a two semester statistics and data analysis sequence directed at MA students in the Transatlantic Masters (TAM) program.

Dr. Jenkins has published journal and book chapters on socialist and post-socialist labor markets, civil society and nonprofit sector development, and political transitions as well as worked on consulting projects on higher education reform in post-communist states.  He has presented dozens of papers at conferences and speaks regularly to community groups on his areas of interest and expertise.

From 2001 to 2015, Dr. Jenkins was Director of the UNC Center for Slavic, Eurasian, and East European Studies. From 1999 to 2015, he served as the Director of the MA in Russian and East European Studies at UNC. Prior to joining UNC, he was an independent consultant and researcher as well as a professor at Yale University. His consulting projects included regional studies of higher education reform in East Europe transition countries, evaluations of civic education programs in Central Europe, and development of new academic programs in Hungary, Poland, and Romania..

He received his Ph.D. in Sociology from the University of Wisconsin at Madison in 1987.